Louis Moinet's DERRICK TOURBILLON is a horological world first, combining the regality of an intricately-engineered tourbillon with the powerful majesty of a fully working representation of an oil derrick.

The unique derrick mechanism dominates the upper hait of the black dial, depicting ail the iconic parts of a traditional oil well pumpjack (commonly known as a nodding donkey), including (from left to right) the distinctive herse head, walking beam and samson posts, as well as the pitman arm, counter weight and crank.

The pumpjack, crafted in brushed aluminium, is in constant motion as it completes a pumping cycle every 15 seconds. lt is visually counterbalanced by the 60-second tourbillon at 6 o'clock, which is supported by a distinctive two-armed bridge. The potent combination of the oil derrick and the tourbillon perfectly complements the silvered central hour and minute hands. 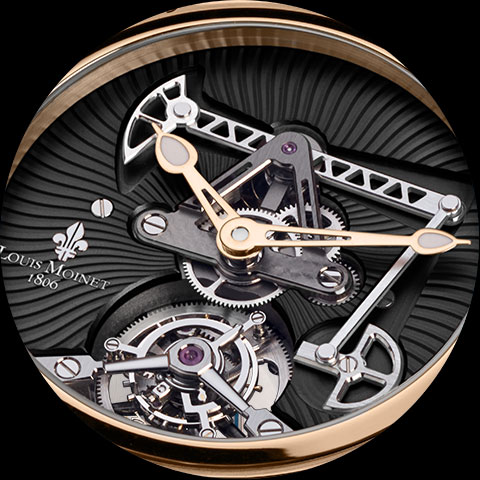