“Memoris Red Eclipse” has now become Louis Moinet’s anthology timepiece, celebrating the bicentenary of the invention of the chronograph – a very limited edition of twelve fully hand-engraved watches. It will be unveiled at an exceptional astronomy event organised by Louis Moinet at the Neuchâtel Observatory on the occasion of the forthcoming eclipse of the moon, on September 16.

To crown it all, the timepiece has just been shortlisted for the prestigious Geneva Grand Prix d’Horlogerie, in the Chronograph category.

The bevelling brings the mechanism to life, on a mysterious starry background. This is crafted using a traditional rose engine – a tool which, despite being all of two hundred years old, has just found a new application, thanks to Memoris. The unique process creates a spectacular effect that makes the stars twinkle in myriad ways, depending on the angle at which they are viewed. 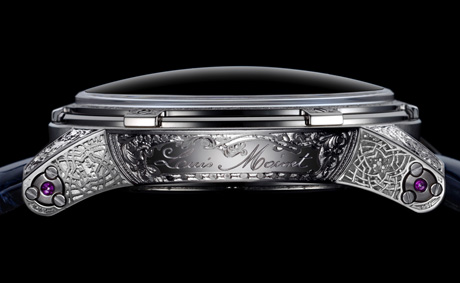 2016 marks the bicentenary of the invention of the chronograph in 1816, by Louis Moinet himself. His Compteur de Tierces is unanimously attested as the first chronograph in history, as well as being the pioneer of high frequency, with 216,000 vibrations per hour. An event entitled “200 years in 24 hours” will be organised at Neuchâtel Observatory on September 16, 2016 to observe the eclipse of the moon – and celebrate this special anniversary at the same time.

Neuchâtel Observatory is a major piece of cultural heritage. Originally known as the Observatoire Astronomique et Chronométrique, it was built in 1858, ten years after Louis Moinet published his now legendary Traité d’Horlogerie. This outstanding venue, closely associated with the history of Louis Moinet and chronometry, has been specially booked for 24 hours for the occasion, from midnight on Thursday September 15 until midnight on Friday September 16.

There, Louis Moinet will be unveiling an exclusive programme retracing the origins and development of the chronograph, one of the greatest complications in Haute Horlogerie for exactly two hundred years now. And in tribute to the astronomical observations of Louis Moinet, “Red Eclipse” will be officially unveiled. The star-studded pedigree of “Red Eclipse” is denoted by a red moon in gold-leaf enamel on its oscillating weight, together with hand-crafted engravings on its bridges and bezel.

An exceptional timepiece in the FINALS OF THE WATCHMAKING GRAND PRIX

“Red Eclipse expresses the very quintessence of our Memoris collection. Marking a very special event, with a limited edition of just twelve timepieces, and boasting top-level finishes, it is aimed at the most experienced collectors,” explains Jean-Marie Schaller, CEO of Ateliers Louis Moinet. What is more, the exceptional timepiece has qualified for the Geneva Watchmaking Grand Prix in the Chronograph category, and will be competing for the title to be awarded on November 10 next.