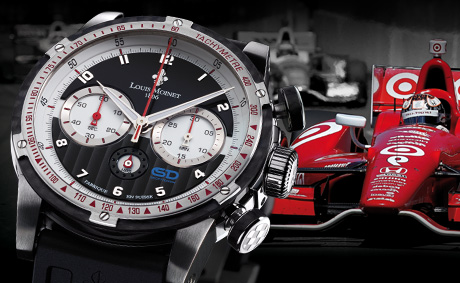 When you have tasted victory in one of the world’s most prestigious motor races once, it makes you hungry for more. Two-time IZOD IndyCar Series Champion Scott Dixon has that hunger. The New Zealander won the Indianapolis 500 from pole position in 2008.

After fractionally missing out in the four editions since, Scott is intent on making it a high five this Sunday afternoon by grabbing glory once again in the century-old race.

He will be backed as always by Target Chip Ganassi Racing with whom he has formed such a successful partnership: Since 2007, Scott has never been out of top three in the IZOD IndyCar Series rankings.

This Sunday’s Indianapolis 500 sees the launch of another promising partnership: Scott will wear a timepiece created by Switzerland-based watch brand Louis Moinet – a timepiece developed in collaboration with the multi-award-winning racing driver.

“I am very excited and honoured to be a part of the Louis Moinet family. It’s a watch brand with such an amazing history,” says Scott. “The timepiece we have created is a beautiful combination of great design, innovation and precision and I am proud to wear it both in and out of my Indy car.”

The Scott Dixon by Louis Moinet is a sporty, two-pusher automatic chronograph packed with racing-refined features, including high-visibility hands; tachymeter scale on the high-tech steel and carbon fibre bezel to monitor racing performance; and chronograph pushers inset with carbon fibre and decorated with a chequered flag motif.

The red and white on the dial mirror the red and white Indy cars and overalls that Scott has worn with such distinction while representing Target ChipGanassi Racing over the past decade. The engraving around the beautiful display back is of a winner’s wreath, vividly evoking Scott’s 2008 triumph at Indianapolis.

The Scott Dixon is an exclusive limited edition of 365 pieces in stainless steel and forms part of Louis Moinet’s Legends collection, featuring timepieces developed in collaboration with an iconic figure who has made an indelible mark by excelling at the highest level in their respective field.

Scott Dixon fits the bill exactly and is ready to show once again this Sunday why he is one of the greatest drivers in IZOD IndyCar Series history.