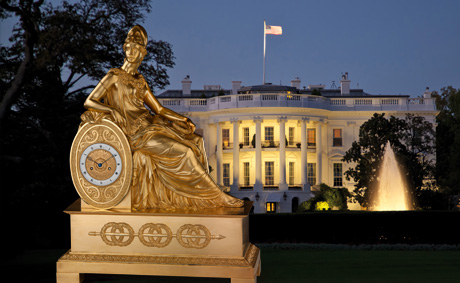 In honour of the American 4th of July celebrations, we would like to take this opportunity to share with you a story, a story about the White House and Louis Moinet, one of the greatest watch and clock makers of all time and inventor of the first ever chronograph.

In 1814, the British burned the White House in retaliation for an American attack on the city of York in Ontario, Canada. It was rebuilt three years later by the architect James Hoban and, in 1817, President James Monroe refurbished the iconic building. One of the principal reception rooms at the White House is the Blue Room, which is one of only three oval rooms, the other two being the President’s famous Oval Office and the Red Room.

President Monroe decided to refurbish the Blue Room in French Empire style and so sent agents to France on what must have been one of the greatest shopping trips of the 19th century. They were looking for the very best, so it should come as no surprise that when selecting a suitable clock to sit in pride of place on the mantle above the fireplace, they chose a stunning gilded table clock by Louis Moinet, who had already made a clock for one of Monroe’s predecessors and fellow Founding Father, Thomas Jefferson, which accompanied the latter during his two White House terms of office.

The Louis Moinet clock purchased by Monroe strikes the hours and quarter hours and features Minerva – the Roman goddess of poetry, medicine, wisdom, commerce and crafts – reclining on a shield. The clock bears the names of both Louis Moinet and Pierre-Philippe Thomire, the acclaimed bronzier who collaborated with Moinet on many of his clocks. Thomire’s beautiful bas-relief engravings depicting military scenes decorate the sides of the case.

Today, only a handful of objects remain in the White House from this period, but among them is the Louis Moinet Minerva clock which became one of the favourite White House timepieces of 11th U.S. president, James K. Polk. And we are pleased to report that nearly 200 years after President Monroe bought the Louis Moinet Minerva clock, it is still sitting proudly in the Blue Room as he originally intended.

Indeed, President Harry S. Truman said during his time in the White House: “It is tragic what happened to the wonderful old pieces of furniture which were bought by the early Presidents. Except for the Blue Room suite there is not a single stick of that original furniture left and the two clocks to which I refer (one of which was the Minerva clock) along with a number of clocks in the various bedrooms, are the only early pieces that are left.”

Later in the 20th century, Hillary Clinton – First Lady to Bill Clinton, President from 1993 to 2001 – said: “Wherever we looked [in the White House] there was something – a clock, a chandelier, a painting, a chair – that told a story about the people and events that have shaped our country’s history.”

Recently, Louis Moinet acquired and restored an original Minerva clock from Moinet and Thomire, dating from 1818 and identical to the one in the White House except that its base does not have a military theme.