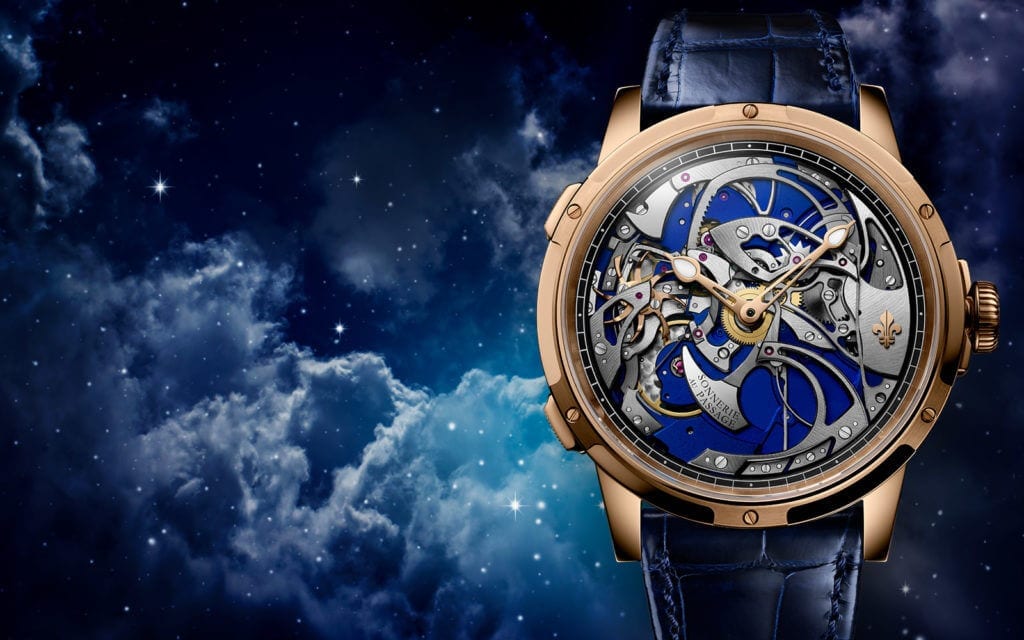 “The hour-strike is an extremely rare speciality, and the configuration used by ULTRAVOX is in fact unique. The mechanism has been revealed, enabling it to be admired in all its complexity. The magic of watchmaking mechanics is embodied by the spinning inertia wheel, the moving yokes, and the hammer that marks out the hours. Two hundred years ago, Louis Moinet’s clocks and pocket watches chimed the hours for leading figures of his day. Now, his name has been associated with that of Eric Coudray, an outstanding present-day watchmaker, to create a new masterpiece in the same spirit”

ULTRAVOX is an exclusive creation, designed to celebrate the two hundred and fiftieth anniversary of Louis Moinet’s birth. The inventor of the chronograph also designed striking clocks which adorned the drawing rooms of the world’s greatest leaders: Napoleon Bonaparte, Tsar Alexander I, US presidents Thomas Jefferson and James Monroe, and many others besides. These works of art are now to be found in prestigious private collections – as well as in the White House, the Louvre, and the Hermitage Museum. Ateliers Louis Moinet also have a large historical collection at their head office in Saint-Blaise.

“This tangible heritage has enabled us to design an Hour Strike drawing inspiration from Louis Moinet whilst also being undisputedly rooted in the twenty-first century. Louis Moinet was both an artist and a scientist. With this in mind, we decided to lay bare all of the mechanics of this complication – a world first”

Watchmaker Eric Coudray is one of the greatest watch designers alive – and a winner of the Gaia Prize. The Ultravox bears the name of this Master and his outstanding team, without whom nothing could have been achieved.

The Latin name Ultravox – “the ultimate voice” – is a nod both to the strike mechanism and to the neoclassical influences on Louis Moinet, whose clocks portrayed figures such as Minerva, Julius Caesar, and Cicero.

The strike mechanism denotes each passing hour on the hour, marking out the appropriate number of chimes. A silencer mechanism also allows the wearer to disengage the chime if they so wish.

A complication revealed as never before

To enhance the sheer excellence of this creation, for the first time Louis Moinet has unveiled its entire spectacular mechanism on the wrist. The pulsating balance wheel, channelling the force of the barrel to regulate the pace of the chime, is revealed. The central flirt triggers a system to arm the hammer: located at eleven o’clock, this strikes out the hours on a gong arranged around the movement.

The movement’s highly complex plate has over 50 jewels in order to engage the chime mechanism’s various components. Its “Moinet blue” colour illuminates the entire watch, setting off the block-polished and chamfered screws above it. The rear reveals an innovative system of parallel double rotors, also enhanced with Moinet blue. The first of these serves to generate power for the hours and minutes mechanism, while the second is dedicated solely to the chime.

With a diameter of 46.5 millimetres, ULTRAVOX is available in a limited edition of just 28 rose gold pieces.