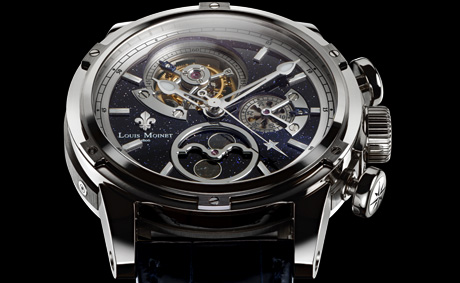 It’s just the kind of piece that Louis Moinet, the inventor of the chronograph, could well have come up with himself. A contemporary of Jules Verne, Moinet would have loved the dial, so closely resembling the moon and stars. The new AstroMoon by Louis Moinet is a unique embodiment of the blend of poetry and precision that is the hallmark of the independent Ateliers – which have just celebrated their tenth anniversary.

A single aim: opening up the heavens

AstroMoon takes up the brand’s main style codes: an aventurine dial, a column-wheel chronograph, and genuine meteorite fragments – combined for a limited edition of just 28 timepieces. The watch is adorned by what has become Louis Moinet’s signature style: dew-drop hands, a large tourbillon cage with curved bridges, a chronograph hand tipped by a star, and pushers that draw inspiration directly from the Compteur de Tierces, the first chronograph in history – invented by Louis Moinet in 1816.

Amidst all this, the moon-phase complication is the most captivating. In similar fashion to the tourbillon positioned at 11 o’clock, it has been made as expansive as possible so that it can be admired in its entirety, against an aventurine backdrop.

The feature has a unique design, as Jean-Marie Schaller, Ateliers Louis Moinet’s CEO, enthusiastically explains: “We started by taking a look at the most common moon-phases and noted one feature they all had in common: a tiny window that was not only small, but also only half-open – with the moon and night sky having to be squeezed into that half,” says Schaller. “Why not open up the heavens? After all, we don’t usually gaze up at a closed roof!”

An all-new design for the moon phase

The result, positioned at 6 o’clock, is wholly unique to Louis Moinet. In the centre of this rotating disc, two fragments of lunar meteorite face one another, symbolizing the moon. Around the disc is set a wide applique ring with curved indentations to show the moon’s phases as the disc turns.

This composition is characteristic of Louis Moinet, in this case from the Dhofar 459 meteorite. To date, only a hundred or so lunar meteorites have been identified worldwide. Most of them are on display in museums, with very few available for artistic use. These are extremely rare collector’s items for enthusiasts and experienced connoisseurs. What is more, Louis Moinet is the only watchmaking brand to offer meteorites from both the Moon and Mars in its creations.

The new aesthetic approach enables AstroMoon to display a broad swath of its dial, made from aventurine. This deep blue material, dotted with a host of inclusions, not only symbolizes the starry sky – it looks amazingly like it, too.

To preserve that deep tranquility, the four screws on the tourbillon bridges and the chronograph counter are blue-tinted, as are their second and minute markers. In similar vein, the hands and bridges are also openwork, allowing the heavenly brightness of the aventurine to shine through.

To house this assembly, Louis Moinet has chosen a case used for many of its innovative creations. Protected by many different patents, it comprises 49 components, and comes here in a 46.5 mm format. The chronograph pushers are at 2 o’clock and 4 o’clock, either side of the Louis Moinet crown and impact resistance system, also patented. The Fleur de Lys – emblem of the Ateliers – is embossed on the surface, as well as featuring as an applique on the dial at 9 o’clock.

The movement powering the AstroMoon is Louis Moinet’s very own, and based on a historic Venus caliber – a venerable, legendary movement acclaimed since the 1960s as a benchmark for chronographs.

Its 373 components boast a highly exclusive finish. The surfaces and angles have been hand-polished in the finest watchmaking tradition. The gold ruby gears and edging and the steel screws, block polished heads and slots emphasize the assertive character of this painstakingly crafted movement. The tourbillon and chronograph bridges are decorated with an engraving depicting the cosmos. Louis Moinet has chosen this legendary caliber not only for its exceptional technical performance and timelessness, but also for its artistic coherence with AstroMoon. Featuring a 50-hour power reserve, the movement is hand-wound.

It is visible through a generous crystal back, with the distinctive signs of Louis Moinet arrayed all around: creativity, unicity, exclusivity and design.