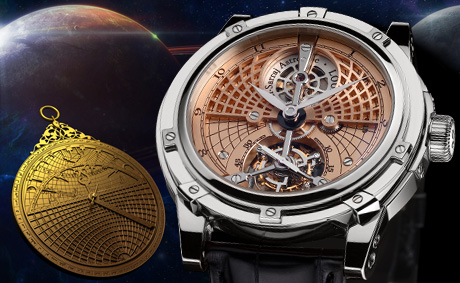 Louis Moinet unveils its latest creation, inspired by one of mankind’s oldest but least-known astronomical instruments, the astrolabe.

An astrolabe is an instrument used to observe the stars and was of great importance in the development of the human sciences. The word astrolabe comes from the Greek astrolabos, which means “an instrument to measure the height of the stars”.

The instrument is represented in the form of a double flat projection which measures the movement of the stars in the heavens. Its invention is attributed to the Greek scientist Hipparchus (c. 190 to c. 120 BC). Its use became widespread from the 8th century under the rule of Arabic astronomers.

Its purpose is to observe the stars as well as determine the time (in the daytime by observing the sun, at night by observing the stars). A simpler version, the nautical astrolabe was the main navigational instrument from the 16th century up until the 18th century.

Measuring the height of the stars

The astrolabe is made up of a disk graduated in degrees and a rotating arm attached to its centre, called an alidade. The alidade pivots on its axis and is directed towards the sun or a star to read on the disk’s markers the angle representing the height of the sun or a major known star in relation to the horizon. The astrolabe is held vertically in the hand by a ring; the stars are sighted by turning the viewfinder until one of them is seen by both ends. The value in degrees obtained by the viewfinder on the arc may be converted into degrees of latitude from the observation point. Time is also determined by the height of the star.

An object of fascination

The astrolabe is a mythical object, which links man to the great mysteries of the universe. The Arabs among others excelled in creating them to the highest artistic quality. Even though the use of a 19th century astrolabe is no longer possible today, due to the planets’ shifting with time, it remains one of the most fascinating objects of human genius.

Where can you see a genuine astrolabe?

The astrolabe is an exceptional object and only a few museums preserve them in their collections. Jean-Marie Schaller, CEO of Louis Moinet, sought to obtain one. This is how an encounter came about with Martin Brunold, probably the only manufacturer of quality astrolabes in the world. For more than forty years this Swiss craftsman has made them entirely by hand, patiently crafted from brass. He has of course an extremely limited production capacity and his works of art are displayed in international museums or belong to private collections.

Martin Brunold is working with Louis Moinet, for whom he made an exclusive series of 12 “Al Sarraj” astrolabes which are exact replicas of the original. This astrolabe is considered to be the most advanced development in the Islamic world. Made by Ahmad Ibn Al-Sarraj in the 19th century, it is kept at the Benaki museum in Athens.

Martin Brunold: “I have been lucky enough to see many astrolabes in my lifetime. From a scientific point of view, that of Al Sarraj is certainly the most complicated that was ever made in the Middle Ages. In addition to this technical complexity there is beauty and incomparable purity… That’s why I wanted to bring this exceptional object back to life.”

For connoisseurs Louis Moinet is reserving an exceptional boxed set containing Martin Brunold’s work of art, the Al-Sarraj astrolabe, and a defined mechanical tourbillon with the streamlined design of the astrolabe. Also handmade, it reproduces the function of the astrolabe of the age, which was the faithful telling of time, day and night. A tribute to human genius around the world, the Astrolabe mechanical Tourbillon is traditionally made and hand assembled in its entirety, in the same poetic spirit as Ibn Al-Sarraj’s creation.

The ASTROLABE Tourbillon is presented in an exceptional 18K white gold case composed of 59 different components and equipped with the Louis Moinet signature crown guard. The latter invention consists of an independent stem integrated within a watertight system and held with a plate secured by four screws. It represents a major advantage in facilitating servicing, compared to traditionally soldered stems.

The view through the ASTROLABE Tourbillon display-back is almost as spectacular as the dial side, with the ‘octopus spring’ of the winding and setting mechanism taking centre stage. This ingenious component is effectively three springs in one – pull-out piece spring, lever spring and click spring – all radiating from the centre like the swirling legs of an octopus. The movement is engraved with Louis Moinet’s Côtes du Jura motif.