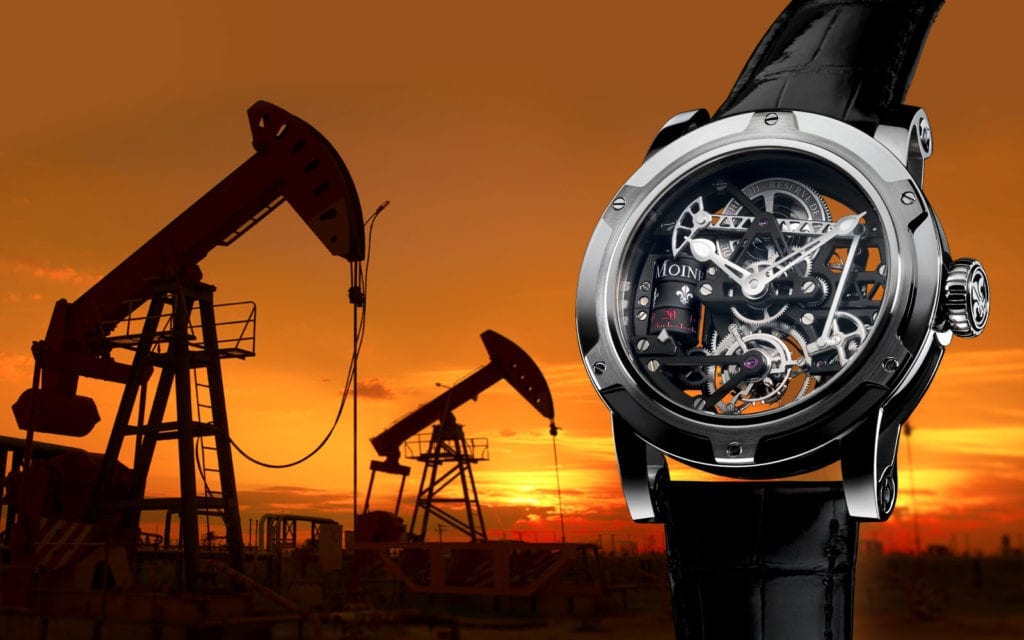 Louis Moinet’s spectacular new-look Derrick revolutionises the worlds of oil and watchmaking once more, with openwork mechanical parts of the movement further enhancing the technology involved in its extraordinary mechanism. The piece boasts a skeleton movement, haute horlogerie finishings, a three-day power reserve, and an all-new seconds display.

“The passage of time is mysterious, inescapable and intangible. Combining time with the world of oil was both a surprise and a success. The Derrick Tourbillon became a classic overnight – and a fun way to measure human activity.”

Three years after it was first created, with a few dozen watches’ worth of original limited editions, the Derrick Tourbillon has taken a new turn, picking up the watchmaking tale where it left off with the advent of the Black Gold Derrick.

The original spirit of the piece, redolent of the world of oil, remains intact. The watch’s entire movement represents the drilling process. A drive shaft sits on the right of the dial, between 2 and 4 o’clock. This powers a long articulated arm, known as the walking beam, between 10 and 2 o’clock. At its left-hand end is the oblong-shaped ‘head’, the most striking visual characteristic of a derrick.

The circuit naturally ends with a barrel at 9 o’clock, made from titanium and symbolising successful extraction. It too is in constant rotation: Louis Moinet has dedicated it to marking the seconds, read off at the bottom of the barrel, on a red engraved seconds track. The rotating barrel is also engraved with Louis Moinet’s name, atop its iconic fleur-de-lis motif.

Echoing the black gold depicted as running through the watch, the bridges are made from black PVD. Created exclusively for the Black Gold Derrick, they are open-worked, so as to give pride of place to the visual effect of the going train.

The plate is also completely new, as is the barrel cover. This now offers a view from above of the spring, whilst raised engraving on the minimalist-style cover proudly displays the 72-hour power reserve.

The Black Gold Derrick is imbued with the spirit of fine watchmaking. The time is displayed by two central rhodium-plated hands, regulated by a tourbillon escapement at 6 o’clock. The bridges and their many acute angles are all hand-finished, featuring pearled decor on the plate and the derrick bridge, and fine lines on the other bridges.

The assembly is housed in a new white gold case by Louis Moinet, dubbed NEO. Premiered worldwide at Baselworld, it embodies a noteworthy step by the Ateliers towards a more dynamic, contemporary style. The NEO case’s original, contemporary design includes open-work lugs; in a fine watchmaking flourish, these sport black zircon tips. In addition to open-work lugs, the sides have been sculpted, and the crown has also been modernised. This technical assembly, with over 45 parts, is topped by a six-screw bezel, now one of Louis Moinet’s stylistic hallmarks.

The Black Gold Derrick comes in a strictly limited edition of 28 pieces.